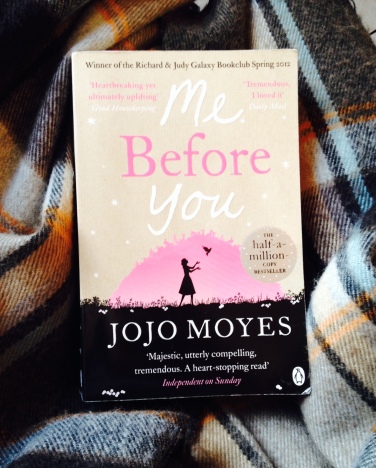 Some believe that ‘love conquers all,’ well, in her book Me Before You, Jojo Moyes presents ‘all’ as being quadriplegic and almost wholly dependent on others for absolutely anything. Can love still triumph over that? Is it enough?

The thing is, Will Traynor was an active, handsome, successful London business man; he loved to ski, to work, to travel, to have sex. His accident changed all of that, or rather, his ability to do all of that. As a quadriplegic, bound to either his chair or his bed, Will lives in an annex off his parents grand house in the countryside. He is constantly at the mercy of others and feels his ability to make decisions and have opinions was all taken away from him at the same time as his ability to walk or lift a cold beer to his mouth.

Then in comes Louisa Clark. She’s a 27 year old wacky dresser, she’s never ventured outside the confines of their small village, and she is in desperate need of a job. She, reluctantly, takes the job as Will’s carer. Louisa and Will are the antitheses of each other. However, her talkative, brash attitude may just be the thing that brings Will out of his sorrowful slumber. Their relationship blossoms, they change each other, and an unlikely affection grows between them despite them being poles apart.

Me Before You follows Louisa Clark’s journey as she learns to cope with Will, not only as a quadriplegic, but also as a bitter, dejected man. Employed for a six month contract, Louise begins to get through to Will; she makes him laugh with the help of their healthy battle of wit and sarcasm. Then Louise finds out why she’s only employed for six months.

Jojo Moyes presents a heart breaking tale of what it’s like to lose yourself. The charming chat between Will and Louisa is heart warming and the injection of cleverly timed humour throughout the novel brings life and lightness to such a delicate subject matter. It concentrates on hope, but also, importantly, honesty and truth.