Canada is renowned for its untouched, unspoiled beauty and one of the best ways to see it, to get in and amongst its rich flora and fauna, is to cycle. 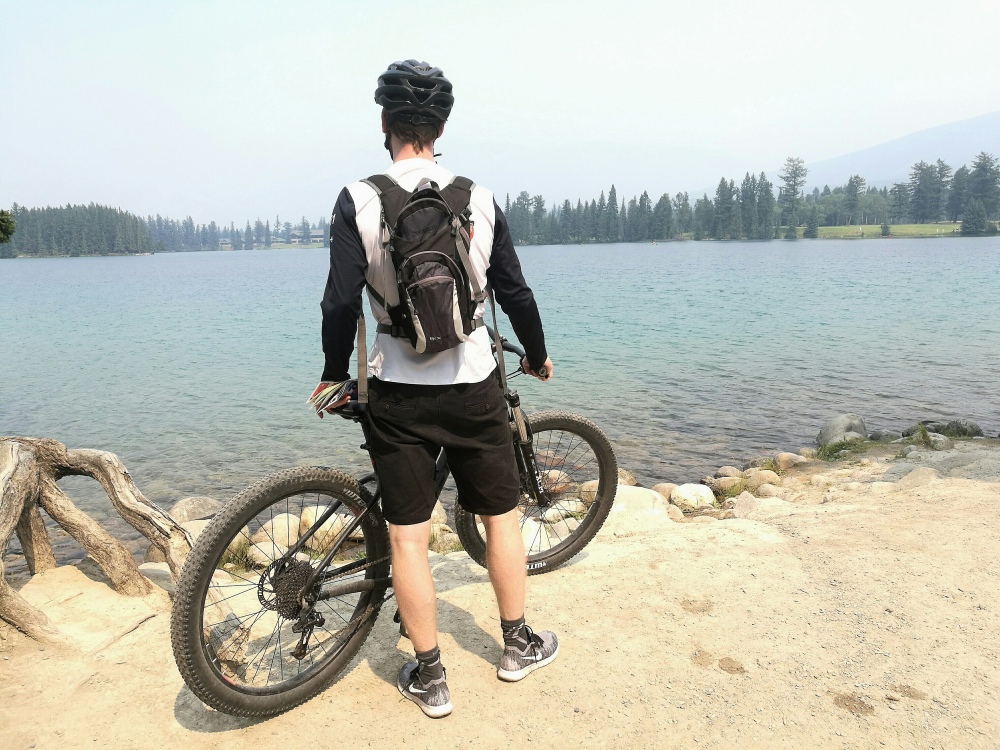 Visiting Canada during July gives you the best weather but also, in the middle of peak season, it gives you the crowds. Hoards of tourists spill off coaches and swarm the lake-sides and quaint towns. But move off the beaten track just a little and you’re golden. Driving through the Rockies we passed the ever popular Banff, the eerily blue glacial Lake Louise and landed in Jasper. They say, take Banff, double the size, half the number of people and multiply the wildlife by three and you have Jasper National Park.

Like much of the Rockies, Jasper town is well equipped for its visitors with a heaving visitor centre recommending the two main cycle hire shops in the area. We dropped by Viscous cycles on the main through road – Connaught Drive – and were immediately fixed up with half suspension mountain bikes with toothed wheels as thick as your forearm. We were also informed of the route closures – there was a grizzly and her kill along one stretch so the paths were restricted. You wouldn’t want to get between a grizzly and dinner…

The cycle routes around Jasper are graded like a ski slope, offering flat, easy jaunts for beginners and challenging uphill battles for the more experienced rider. We chose a middle ground weaving between the lakes just outside town. In such a vast, rich landscape, there would be no certainty of seeing the amazing creatures that inhabit the national park, but, knowing animals often collect around water, we had given ourselves an excellent opportunity.

Disclaimer – I have never been mountain biking. Sure, I went off road when I lived in the countryside and managed that quite well. But I’m a road cyclist – I live in the heart of London so the main thing I have to look out for is potholes and pigeons.

Once used to the much larger mountain bike with handle bars like Michael Phelps’ shoulders the journey started well. The wheels bounced over the rocks with ease, the front suspension saving my wrists from jarring.

Hugging the lakeside, we come up to a family with binoculars trained onto the opposite bank. These Canadians kindly passed over their binoculars and pointed out the grizzly in the distance, taking a lake-side nap with her cubs. Then, they directed us above her to where there was a cartoon-like bald eagle perched atop the tree, no doubt keeping an eye on grizzly’s dinner.

What an amazing thing to see just minutes into our cycle – that typifies Jasper really. You’ll be bumbling around then a bear will pop up or an elk. Talking of which, once we’d followed the lake round – and skirted around the restricted section due to the grizzly family – we saw a herd of elk prancing down the river. What a sight!

Though the cycle got quite tricky at times – we’d taken a wrong turn up hill and ended up doing a much tougher section of the apparently manageable route – cycling in the Canadian Rockies is a must. You are surrounded by mountains and wildlife, bouncing along dusty, well worn paths, tipping your helmet to the occasional Canadian jogger. It’s just you, your bike and the wildlife. Just be sure to whoop and holler (bear bells don’t work) every now and again so you don’t interrupt a bear during dinner time. A surprised bear isn’t a happy bear…